Time and again, data has shown an increase in mobile internet usage. Still, some plumbing websites remain optimized primarily for desktop display. Recent data from the Pew Research Center reveals that desktop / laptop ownership has actually decreased since 2012. As of January of 2018, desktop / laptop ownership stood at 73%, which while still a considerable number, is a decrease from January 2012, when the percentage stood at 78%. This drop-off has coincided with an uptick in tablet ownership. Tablet computers have risen from 19% ownership in 2012, to 53% as of 2018. See the chart below: 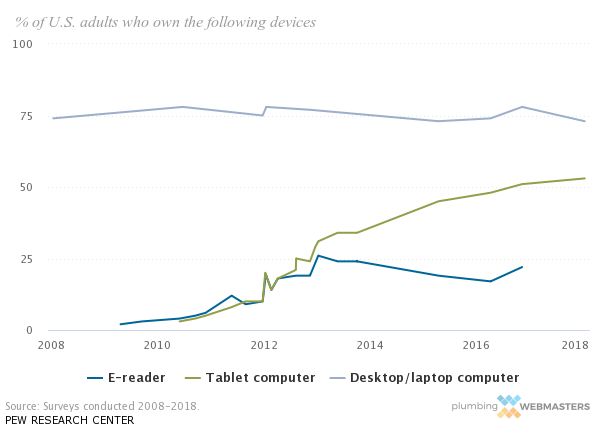 Over the same length of time, smartphone ownership has risen from 39% to 77% . While owning a basic cellphone is not especially modern, ownership of wi-fi enabled, browser-friendly smartphones is. These outlandish increases of 34% (tablet) and 38% (mobile), should be noted by plumbing companies across the nation. With 77% of U.S. adults owning a smartphone and just 73% owning a desktop or laptop computer, as of January 2018, it marks the first time in history that more Americans own smartphones than computers. See the smartphone chart below: 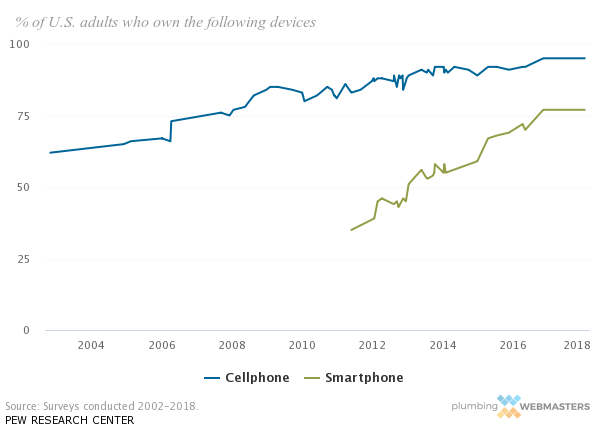 So what does this all mean for plumbing companies and their websites? Here are 3 reasons why plumbers need mobile websites in 2018:

The data has been published, and it’s hard to argue with raw statistics. Since more adults now own smartphones than desktop or laptop computers, plumbers should recalibrate most of their resources to reaching consumers at their preferred medium. Plumbing customers might search for reputable companies by a number of different mobile-oriented means. Some of the most prominent channels to consider include:

With so many ways to reach plumbing websites through smartphone channels, plumbers better make sure their company site is presentable. That means simple navigation, with mobile-oriented display, and nothing less. It’s also optimal to incorporate phone number links, so that smartphone users can click-to-call straight from their mobile browser.

Finding a plumber online in 2018, is much easier than it was in 2012. As the data shows, the majority of Americans did not own smartphones just 6 years ago. For this reason, they had to research plumbers on their desktop or laptop computer which entailed several steps. Today, such actions can be performed in a fraction of the time it took only 6 years prior. Finding a plumber via smartphone is convenient for the following reasons:

For the average American in 2012, an 8-5 work schedule would preclude them from researching plumbers within that time frame. While some might have carried laptops along with them, the opportunity to use it would be few and far between. Today, in 2018, smartphones are on the average American’s person at all times. Lunch break, browse the net. Step out for some air, browse the net. This seismic shift in research opportunity cannot be overstated.

As recently as 2012, a consumer’s options were dependent on their personal research acumen. For instance, a skilled desktop user could probably narrow their results by location, reviews, and pricing within a half hour or so. Conversely, a less proficient user would struggle to narrow their options based on reliable metrics. Today, research requires far less acumen and perhaps more importantly; less time. Smartphones do most of the work for consumers, allowing them to make good choices quickly. A smartphone search can narrow plumbing contractors by:

To expound on the concept of authority, Google ranks websites based on their domain authority, as well as their mobile usability. The two measures often go hand-in-hand because mobile-friendly websites earn higher quality links, which in turn boosts domain authority. As a result, mobile users are presented with the most authoritative options first, which are almost always companies that display mobile-optimal websites. It’s never been easier to locate a quality plumber so efficiently.

Plumbing contractors who read this page might immediately check their own website’s display on a mobile device. This action is actually very intelligent. Viewing your existing website from the perspective of a mobile user, can help you determine whether or not your site, is in fact mobile-friendly. If it turns out that it isn’t, there are steps that can be taken to change that. Plumbing Webmasters offers website design services for plumbing companies throughout the United States. We look forward to crafting your custom website for optimal mobile display.

Our design process is comprehensive and intuitive. In designing a custom mobile site for our plumbing clients, we focus not only on display and navigation, but also on aesthetics. For instance, we optimize client logos for mobile website display, and compress them in a manner that encourages faster loading time. Google favors mobile sites that load quickly, which parallels with a decrease in attention span for the modern internet user.